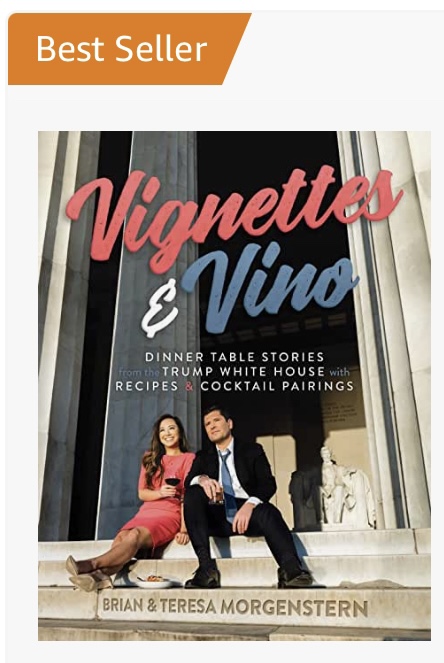 Countdown to the release of our new book, Vignettes & Vino: Dinner Table Stories from the Trump White House with Recipes and Cocktail Pairings. October 25th is the big day!

Keep an eye on our social media feeds and elsewhere for us!

The book is available for pre-sale now in the biggest retailers in America! Order your copy today at one of these fine choices:

Across the pond, Liz Truss is stepping down as Prime Minister after 44 days—the shortest tenure ever. Don’t feel too bad, though. She’ll get a nice pension of £115,000 a year for life! The race is on to succeed her, and it should be concluded in the next week. In a fun plot twist, Boris Johnson is likely to give it another run after leaving office just weeks ago.

Some more interesting polling data came out this week, and it looks very good for Republicans as election day nears:

In blue Michigan and Minnesota, the GOP candidates for Governor, Tudor Dixon and Scott Jensen, respectively, are in statistical ties with their Democrat-incumbent opponents. Speaking of blue states, friend of WTF Rep. Lee Zeldin is within striking distance of winning the race for Governor of New York.

In all of the most closely-watched senate seats, Republicans have the momentum at this point:

Real Clear Politics has updated its projection to a 3-seat majority for Republicans in the Senate and a fairly comfortable majority in the House.

Crypto Rules in the Lame Duck?

Some fairly significant movement is taking place at the Senate Agriculture Committee where Sens. John Boozman (R-AR) and Debbie Stabenow (D-MI), their staffs, and industry advocates are playing with some “working draft” legislative language to regulate the crypto industry, which could move during the lame duck period after election day in November and before the new congress takes office in January. A bit of logrolling appears to be going on to stave off attacks from the left flank, and the industry is working to stifle the outsized influence being sought by the notoriously challenging SEC led by Gary Gensler in favor of the CFTC, viewed as a more reasonable regulator.

This week, the Treasury Department released CFIUS Enforcement & Penalty Guidelines. The Committee is signaling a strong focus on failures to comply with mitigation agreements as well as failures to file mandatory declarations.

Score one for the industry groups regulated by the CFPB. They've won a critical victory at the Fifth Circuit, which held that the CFPB's funding structure--which skirts the congressional appropriations process--violates the constitution. Expect a GOP-led congress to tray and further reign in the left-leaning regulator championed by Sen. Elizabeth Warren.

In the wake of Kanye West, known as Ye, getting cancelled for offensive remarks, he appears to be on the way to buying conservative social media app Parler.

This is happening as Elon Musk is poised to close his deal to buy Twitter and clear out three-quarters of its workforce.

Many other businesses are touting their free-speech bona fides, including:

Public Square—which is a marketplace for conservative businesses

1½ cup mushrooms (cremini or shiitake, or both)

While the onions and mushrooms are cooking, combine the half-and-half, eggs, and garlic powder in a bowl. Whisk together until the custard mixture is smooth.

Bake in the oven for 35 to 40 minutes, until the cheese forms a golden brown crust. Remove and let the quiche cool for 30 minutes. Serve for breakfast, lunch, or dinner!

Tip: Instead of washing the mushrooms in a bowl of water, rub any dirt off them with a wet paper towel. This prevents the mushrooms from soaking up too much water and watering down the dish.

It’s a twist on a French 75. When we went to Paris, Teresa not only had a French 75 there, we also loved the restaurant Frenchie. So we call this the Trenchie 75.

Put a few crushed ice cubes in a shaker. Add the vodka, St. Germain, simple syrup, and lemon juice. Shake well. Strain into a glass. Top with the Champagne and lemon twist.

Georgia gubernatorial candidate Stacy Abrams is becoming a WTF Hall-0f-Famer at this point. This week she actually said that abortion is a solution to inflation because "having children is why you're worried about the price for gas ... [and] how much food costs." OK, STACEY! We like how Meghan McCain summed it up:
"'Abort your children because we can't fix inflation' is a one hell of a talking point....."