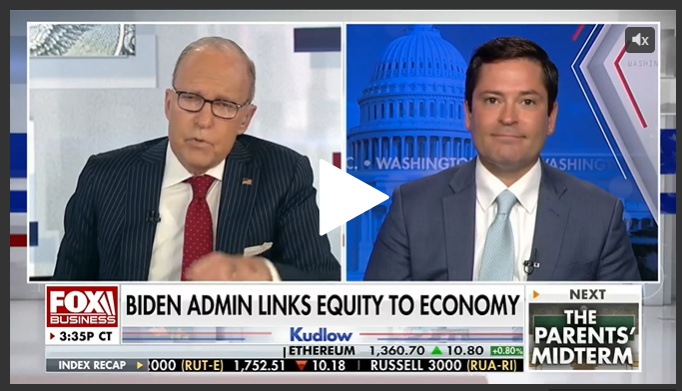 Brian joined the great Larry Kudlow on Fox Business Network on Thursday to discuss the keys to a strong and inclusive economy and why the Biden team's focus is off the mark.

President Biden made eye-popping comments about a potential nuclear Armageddon this week. (We can only imagine what the reaction would have been had President Trump said something similar.)

Gas Prices About to Spike?

OPEC announced it is cutting its output by 2 million barrels a day, adding to economic anxiety, particularly with respect to energy prices and inflation. Republicans are renewing their calls for domestic energy independence.

WaPo's reporting indicates that federal agents investigating Hunter Biden appear to be (finally) losing patience and feel that there is more than sufficient evidence to charge him with federal crimes.

Arizona senate candidate Blake Masters is hoping that his smackdown of Sen. Mark Kelly on immigration in their debate this week will shift this race into the R column. The key exchange was:

Some more interesting polling data came out this week:

This week, the Commerce Department's Bureau of Industry and Security (BIS) is poised to release two new rules:

This is another favorite from Vignettes & Vino! We'll be enjoying it on Saturday to fuel up for the Army Ten Miler on Sunday.

In a pan over medium-low heat, pour a layer of olive oil. Add in the diced onions, minced garlic, and bay leaves until fragrant.

Carefully pour the canned tomatoes over the mixture. After simmering for 5 minutes, throw in some hand-torn basil (but save some for garnish later).

While the tomatoes cook, add in the dried Italian-seasoning blend and 2 tsp. garlic powder. While stirring the sauce, be sure to crush the whole tomatoes as they get softer. Add in the sugar as well as the salt, pepper, and red pepper flakes to taste. Let the sauce continue to simmer on low heat for 15 minutes.

Meanwhile, prepare 3 shallow dishes for breading the chicken. Put the flour in one dish and season with salt and pepper. In the second dish, pour in the beaten eggs (add a splash of water). In the third dish, combine the panko crumbs, chopped parsley, 1 tsp. garlic powder, and grated Parmesan.

In a separate oven-safe pan, pour in 3 tbsp. olive oil. Do not start to heat the oil yet, as it can heat fast while you’re preparing the chicken.

Set the pan with the oil over medium-high heat. Once the oil is hot (you can test with a drop of flour—if it sizzles, it’s ready), fry each chicken breast for about 4 minutes on each side until golden brown and crusty.

While the chicken breasts are frying, blend the finished tomato sauce using either a stand blender or an immersion blender.

When the chicken is done, pour the sauce over each piece in the same pan. Then place slices of mozzarella on top. Grate fresh Parmesan over the mozzarella. Add more hand-torn basil to finish it off.

Bake the pan in the oven for 15 minutes. Then broil it for 2 minutes. Carefully remove the pan from the oven.

Serve over pasta with extra sauce, and garnish with more freshly grated Parmesan and basil.

TO DRINK: Chianti and Sambuca

As hard as we tried, we could not come up with a better pairing for chicken Parmesan than a full, flavorful glass of Chianti, a classic Italian red wine. Torraiolo makes an excellent, modestly priced vintage.

After dinner, chilled sambuca makes for a delicious digestif, and we’d go with Romana white sambuca. We learned years ago at an Italian restaurant that the proper way to drink sambuca is chilled, with three coffee beans floating in it to represent health, happiness, and prosperity.

Pour the sambuca in a shaker with ice, shake well, and strain into a short glass. Drop three coffee beans on top and watch them float. Then toast to la bella vita.

The WTF moment of the week isn't always something bad. Sometimes it's just something surprising and interesting, which is how we felt about the lengthy interview of Kanye West--now known as Ye--by Tucker Carlson.

Ye said that wearing his White Lives Matter shirt was funny because it was the "obvious thing," that "liberal Nazis" try to suppress his free thought, and much, much more.